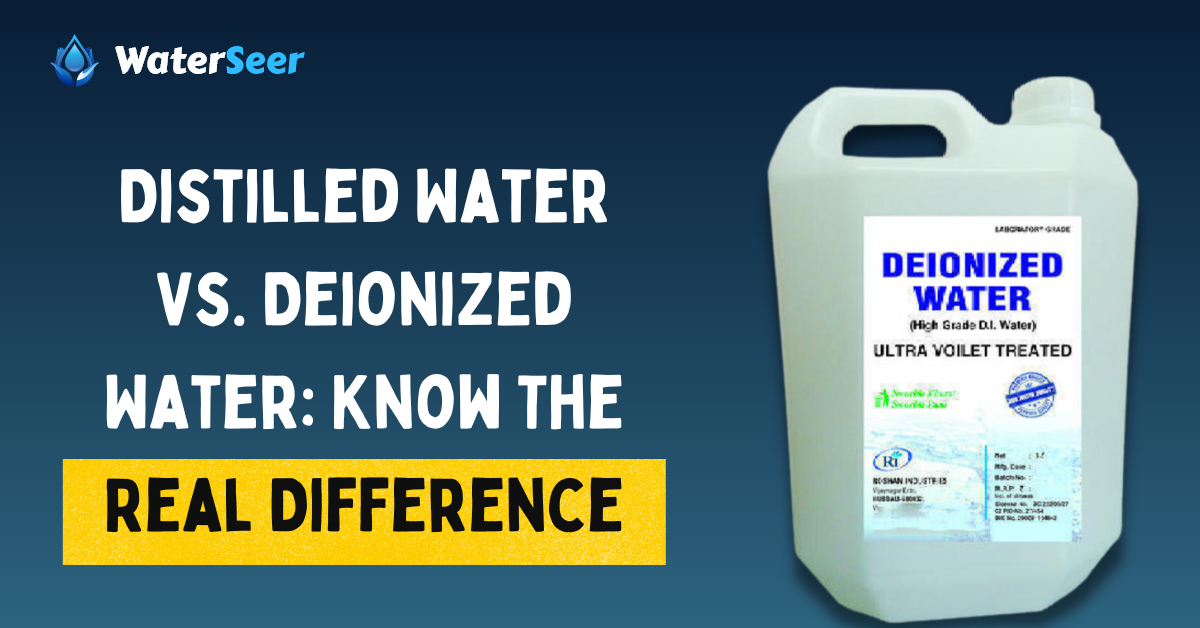 Safety is always our first concern, especially in water, as it is essential to life.

Tap water is never a healthy option to drink, but it is widely available for drinking worldwide. This is why water filters are crucial if the tap water is contaminated and tastes funny.

As normal humans, we always look for water filters, which can provide more beneficial and nutritious water to drink.

If you are looking for a pure form of water filter, either for laboratory purposes for creating solutions, calibrating apparatus, cleaning glassware or other laboratory equipment, or simply curious if it is safe for consumption, then we have two options for you, along with their contrasts.

Deionized and distilled water are two ultra-pure forms mostly used in labs as distilled water does not react with other chemicals, giving absolute experiments and results. In contrast, Deionized is primarily used as a cleaning agent for apparatus, but they are prepared in very different approaches.

Although removing ionic contaminants is identical to distillation and deionization, they are still different. They cannot be used interchangeably for several lab applications or consumption.

There is no doubt that these purification processes remove a very high level of contamination from the water, but there are some differences, too.

Know The Real Difference Between Distilled Water Vs Deionized Water

In this article, we will talk about the consumption of these water forms and the real difference between both water forms. We will discuss the cost and the process ‌further in this article.

It’s crucial to pay close attention to water classification since it might reveal fundamental distinctions between how it is utilized and whether it is safe to consume.

What is Distilled Water?

Distillation filtration is one of the earliest processes for producing pure water.

Heat is used to purify the water until steam is produced as a result of evaporation. This vapor condenses into the water and is collected in a sterile container.

Particles, like chemicals, viruses, etc., are left behind in the beaker/jar when a liquid transforms into steam. Since water has a lower boiling point than most pollutants (such as minerals), it quickly gets evaporates and leaves behind specific contaminants.

As a result, the water produced is exceptionally pure.

Although this may seem fantastic, it’s not the best option for drinkable water because the distillation process eliminates many beneficial, naturally occurring elements in the water.

Consuming this kind of water may ultimately do more damage than good. Examining the contaminants in the solution is essential since some contaminants, like volatile organic compounds or mercury, evaporate with the water.

Additionally, sometimes water is double- or triple-distilled, with evaporated water going through a second or a third round of boiling and condensing. Tap water serves as the primary water source throughout the distillation process.

What is Deionized Water?

The deionized water is also known as the “demineralized water” because, in this filtration process, all the minerals of the water are completely removed by using a particular mechanism.

The process is straightforward and occurs very quickly. The leading equipment used to perform this process is a mixed bed resin, which is electrically charged (containing cathode and anode).

The water must pass through these regions during the filtration process.

Deionized water is one of the purest forms of water. Generally, the water we get from tap water or municipal water consists of several ions or chemicals like chlorine, iron, and sodium. This deionized process assembly completely removes these ions.

Due to this, the ions in the water are entirely removed, producing deionized water.

What is The Difference Between Deionized Water And Distilled Water?

In the majority of cases, deionized water and distilled water are interchangeable. Though they both are pure forms of water, the surveys claim that the distilled, or double distilled water (generally used in a chemistry lab), is the purest form.

There are several differences between both types of water, and a few of them are listed down below:

1. The Time and Cost

The deionization process is rapid. This process becomes much easier if a mixed bed of resin is utilized to pass the water. Still, sometimes two mixed resins bed cartilages can also be used to enhance the quality of the purification. But even then, it is much quicker than the distillation process.

The only expense is the DI resins.

Meanwhile, the distillation process is a very time taking process. Several types of equipment are used to carry out this complex process of boiling, cooling, and collecting.

The process takes considerable time and patience because the water is boiled, and these steams are organized, which cools down again to become liquid. This liquid form is collected in a container drop by drop, thus requiring considerable time.

Due to the complexity and the requirement of massive and better quality equipment, this process is very costly compared to the deionized process cost. Moreover, the method also requires heat excess and sterile containers.

Apart from this, there is a high possibility of water becoming ionized again if it encounters the air.

The distillation removes all the impurities like chemicals, minerals, and disease-causing microorganisms (bacteria and viruses).

The only content that the distillation process cannot clear is the volatile organics. Volatile organics get converted into steam and can pass on to the final collection container.

The deionization process removes all the minerals from the water but cannot remove the organic material. To overcome this disadvantage, reverse osmosis is performed where the additional contaminants get removed from the water.

Then, to remove the ions from the water, the distillation process is used.

The main difference between both water purification methods is that distilled water requires a multi-step process, which is not the same with deionized water.

Deionized water is generally used in scientific activities like in a chemistry lab or research lab. Typically, the experiments require 100% pure water. The pharmaceutical company has also used this water to ensure safety and precautions. Any living organism can’t consume deionized water.

Distilled water can be used for drinking, but it is tasteless. If you don’t require it for drinking, it can also be helpful in other ways.

The humidifiers, CPAP machines, etc., usually use distilled water. These appliances are prevalent health equipment found in people’s homes. Besides the health equipment, this water is used in the aquarium, water house plants, and vehicle maintenance.

Deionized water is available in the market and generally depends on your region. The retail suppliers supply them in big containers when required for the manufacturing process.

It is always recommended to buy it from a trusted supplier or branded company to ensure the quality of deionized water. This will also help in avoiding potential pitfalls in the equipment and experiments.

Distilled water can easily be available in the market, but most research labs prefer to make it in their lab to ensure quality.

In addition, this process is very ancient, and one can do it in the home but in a remarkably preserved environment. It requires some equipment to ensure the better quality of the water.

After coming across all the differences, let’s discuss the most important one! Several water purification methods are available in the market, but consumers are always confused about the advantages and disadvantages of a particular process. So, without wasting time, we will get straight to the point.

Deionized water is strictly prohibited from being consumed by humans or any living organisms because it is highly aggressive.

Healthy drinking water should contain all the minerals and nutrients to be beneficial for drinking. Electrically charged resins take out all the necessary minerals and ions from the water.

The World Health Organization has restricted the use of deionized water among the general public to consume. In addition, the water is free from ions, but it is not free from disease-causing microorganisms.

So it can be highly impact the health of an individual. Using deionized water is only restricted to industrial use.

While humans can consume distilled water, it has no minerals. The water is also tasteless, so if you even want to consume it, then it is an individual’s choice.

Water purification has become essential to ensure water quality in today’s world. It doesn’t matter if the water is being purified for a drinking purpose or the different sectors or industries in the world. Different methods are used to ultra-pure water or get the purest form due to the increasing industrial waste and environmental pollution. The scientist and all the workers generally prefer it because the water quality can also impact the working of the machines and the quality assurance. Techniques like reverse osmosis, deionization, distilled water, etc., are urgently used in combination in research laboratories.

The deionization of water or distillation process is considered the oldest process to produce or purify water. The deionized water means that the water will not contain any ions, and the distilled water will not include any disease-causing microorganisms or minerals.

Different industries, like research labs, vehicle manufacturing, pharmaceutical, agriculture, etc., have preferences according to their product. They are equally beneficial in various sectors, but the deionization of water cannot be used for drinking.

In contrast, distilled water can be consumed as it is tasteless. So, whether you want to consume it or not is a personal choice. We hope this article has cleared all your doubts.