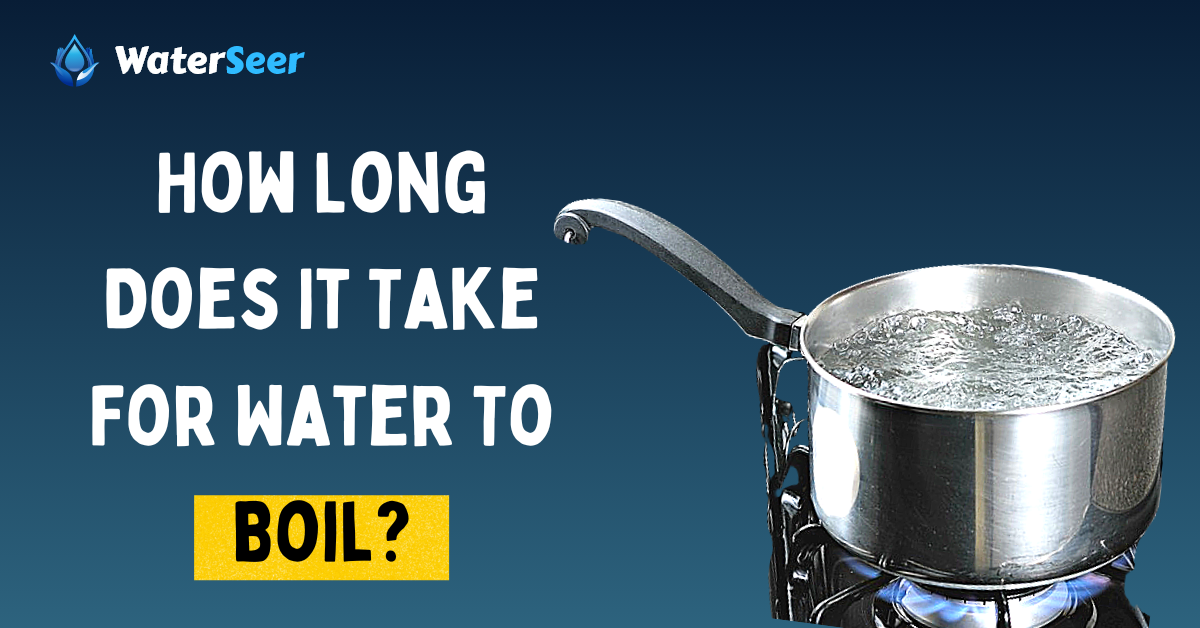 Most of us simmer water almost every day, or maybe even several times throughout the day. We’ve become so used to this simple task that it’s also become second nature for us to wonder just how long does it take for water to boil! Think about it: It may have happened while you were making coffee, or maybe while you were waiting to do the next step in that recipe you’re trying out.

No matter the situation, this question has most probably crossed your mind at one point or another. This is especially true; let’s be real if you are bored with waiting and you start wondering if it really should take that long for your water to boil!

Waiting for that container of water to reach boiling point can be quite a mundane and boring task. Adding to this, it can also be very much baffling because it seems like water doesn’t always boil for the same length of time!

Sometimes it seems speedy, and waiting is a breeze, and at other times it seems like it will never reach boiling point! Is your mind playing tricks on you, or is there something to this varying time?

The answer is that there are several factors that affect how long water will take to boil. Knowing these factors and finding out how to make the process go faster can help you more efficiently boil water – and be less restless while you wait because you know it’s happening at the speed it’s meant to!

Before we get into anything else, let’s first tackle the most basic question: What is water’s boiling point?

To answer this, we first need to understand exactly what water is. Water is a molecule. It is a molecule consisting of two hydrogen atoms that are bonded by one single oxygen atom. This is why the element is written as H2O.

Different chemicals heat up and cool down and even work in varying ways. Water is an odorless, colorless, and flavorless chemical. Temperature very literally affects water in many, many ways. This is why there are many factors affecting boiling time!

Alright, so while the water boils at varying lengths of time depending on many variables, there are still some standard lengths of time that we can take note of. Here they are:

There are many factors that affect the time it takes for water to boil. The lengths of time mentioned previously assumed that there is average atmospheric pressure at 1Atm, a constant increase in the heat, and no loss of heat.

Otherwise, here are the factors upon which the time it takes for water to boil is dependent.

Let’s say you have two pots of water, one small and one large. Which one do you think will boil quicker? The answer actually depends not on the size of the pot, but on how much water is inside. If there is a larger amount of water, it will take a longer time for it to boil.

If you have two pots that are of equal size both heated at the same time, one pot with one cup of water and another pot with three cups of water, the one with less volume will take less time to heat because there is less of it to heat.

If you have exactly the same amount of water but in two different-sized pots, the one with the larger surface area will take faster to heat the water.

The higher the altitude is, the more the atmospheric pressure will then decline. Simply put, there is more air available at sea level compared to areas with high altitudes like mountain tops.

To put it simply, this refers to these three things: Low heat, medium heat, and high heat. The higher the heat is, the faster water will be able to reach the optimum temperature for its boiling point.

Also Read:- How To Make Your Own Distilled Water? In 5 Easy Ways

Alright, so when it comes to heating method, what we are referring to is which heat source you will be using. Various heating methods provide varying sources of energy, which leads to water being heated at varying rates as well.

Electricity helps to heat a heating element located under the plate cover. The element helps in heating the cover. The cover then evenly heats the pan or pot. Once the pan or pot is fully heated, that’s the only time the heat will transfer to the water, which will eventually make it boil. It’s a lengthy process and is one of the slowest to bring water to boiling point.

Gas stovetops are more energy efficient. They provide a direct and instant source of heat. Gas produces flames which will directly heat up the pot. This means that all you need to do is wait for the pot to fully heat and then it will start heating up the water. It’s a much quicker process than with electric stovetops.

These are very advanced and have clever technology that provides heat faster to pots and pans. This technology utilized magnetic induction to make heat and heat up metal pans and pots. Electricity passes through a copper coil that creates magnetic currents which make heat. This heat will transfer to the magnetic metal pan and pot and heats it directly, stripping away other layers. It will instantly start to heat your water.

This is one of the quickest ways to heat water. The kettle heats the water directly, causing it to start boiling within a few minutes.

You may think that this works similarly to a pan or pot being heated and then transferring that heat to the water. But no! Once the kettle is on, it sends a big electric current through to an element that touches the water directly. This element has an electrical resistance and turns energy into heat, which heats up the water and brings it to the boiling point instantly.

These kettles work exactly like a pan or pot would on a gas stove. But where it differs is in the materials that they are made of. Gas kettles are placed on top of a direct heat source like a gas burner, which will heat the base and conduct the heat to water.

Microwaves heat up food and liquid very quickly by using electromagnetic waves, which cause friction between molecules. This helps to heat things faster.

Also Read:- How Long Can You Survive Without Water?

Here is the answer to the more prominent questions that you have been looking for.

Yes. One liter of water, on average, boils at roughly 6 to 8 minutes in standard conditions. If you are using certain heating methods, such as a microwave or electric kettle, then this will boil faster, around 4 minutes. Boiling less water – let’s say, one cup instead of one liter – in standard conditions will also lead to faster boiling times of about 1 to 3 minutes.

Q2. Does water boil faster with a lid?

Yes. Water boils faster with a lid. A lid keeps the heat inside the container, which heats the water inside it much faster.

Q3. How long does it take to boil water from the cold?

Generally speaking, the colder the water initially, the longer it will take to boil. The closer that the water is to a boiling point prior to heating it will mean the faster the boiling time. So boiling cold water will lengthen boiling time to anywhere from a minute more to double the standard boiling time, if not more.

Q4. How do you get water to boil faster?

As we said, many factors can affect boiling time. That said, these are some things that can help get water to boil more quickly:

Q5. Does putting salt in water make it boil faster?

This is a suggestion that is commonly floated around. However, it is a myth. Chemically speaking, salt does raise the boiling point. But in recipes and such, the amount of salt that is added is so minuscule and insignificant that it will not make a difference in boiling times.

No, same as above, the nearer the substance is to a boiling point, the faster it will boil. Ice seemingly boils faster because it melts fast, but that does not speed up the actual boiling time of the melted water.

So, what is the exact answer to the question of how long it takes for water to boil? It all comes down to whatever it is that you have to work with, but all the info stated above will guide you into finding the most optimal way available to you to boil water more quickly.