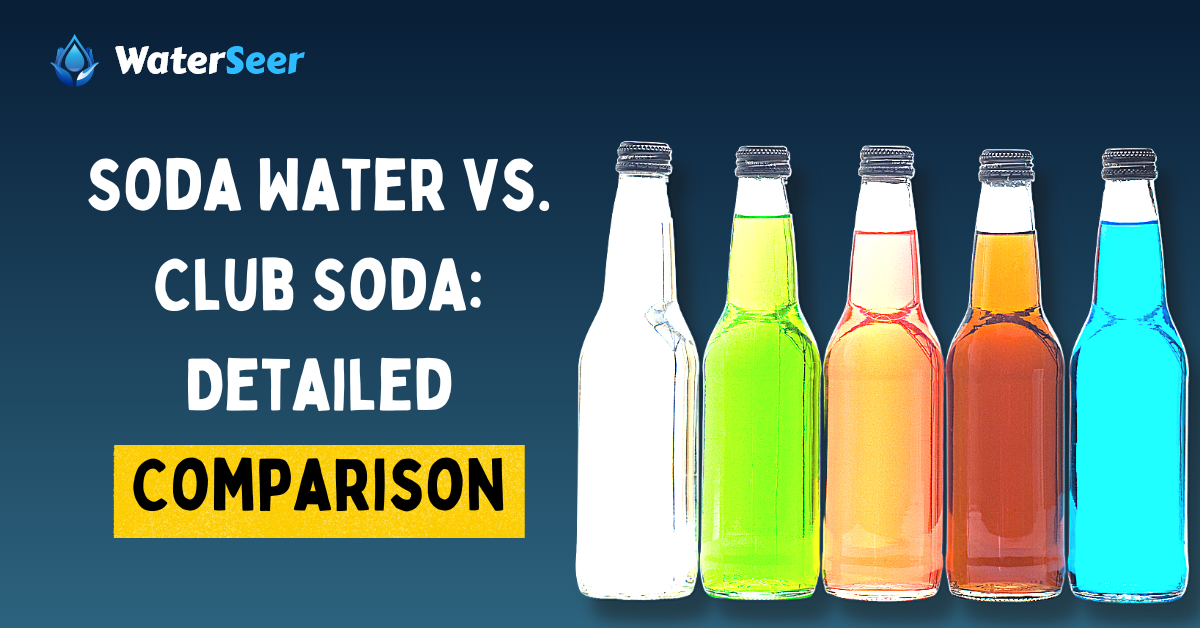 Hydration is key to a healthier body and lifestyle. Plus, it’s also key to feeling absolutely refreshed throughout the day! A glass of cool water can hydrate and refresh and just jump-start the senses. You don’t have to restrict yourself to just plain water — there are many other water-based drinks available that can spice up your hydrating options!

Sometimes, ice-cold glass of soda water may just be what you need, sometimes with a squeeze of lime to go with it. You can also take a sip of sparkling water, seltzer, soda water, and so much more! There are so many options to choose from that sometimes ordering at a restaurant, or a bar can turn into a very confusing affair.

Two types of carbonated waters often lend to a lot of confusion: Soda water and club soda. Well, read on to know which is good for you so you’ll be able to get exactly what you want — no substitutes for switcharoos!

These bubbly beverages can appear very identical, but each one actually is made using different processes and contain different flavor profiles. For you to better be able to identify them, here’s a guide to carbonated water in its various iterations.

Also Read:- What is Alkaline Water? Uses and Safety

Soda water has been referred to as an ambiguous term for carbonated water. It has been around for a very long time. In fact, soda water was what the first water that was commercially available artificially carbonated was called way back in the late 18th century.

These days, soda water is used synonymously with seltzer. Some people use it to mean club soda. Though the more widely accepted and acknowledged is to use soda water as a term synonymous with seltzer, you still have to be careful when you are ordering “soda water” because this can lead to many mishaps.

These are all umbrella terms to deserve water that’s been pressurized by using carbon dioxide gas to then produce bubbles or ‘effervescence.’ Carbonated water can be a naturally-occurring thing — certain mineral springs can produce water that is carbonated – or it can also be artificially created with the use of carbon dioxide cartridges or tanks. A slightly acidic pH is brought about to the water by the carbonation process.

Seltzer, also known as seltzer water, is carbonated water that has no other ingredients added to it. Seltzer simply contains two things: Water and carbon dioxide. If you have your own home carbonation system, such as SodaStream, and you do not mix in any added flavors, then you are basically making seltzer.

Club Soda, on the other hand, contains added minerals. It is artificially carbonated water that has sodium salts and/or potassium salts. These can mean to include sodium bicarbonate aka baking soda, and table salt too. Carbonated water is mixed in with these alkaline substances to neutralize its acidity and also to copy the flavors of naturally-occurring mineral water.

Mineral water is basically an umbrella term that can be used to refer to either sparkling water or flat water that comes from a mineral spring. The FDA defines mineral water as “containing not less than 250 ppm total dissolved solids that originate from a geologically and physically protected underground water source.” If the water that originated from an underground source contains less than 250 ppm dissolved minerals, it can be referred to as spring water.

These are two very popular brands of sparkling mineral water. They are both acidic: Perrier with a pH of about 6 and S. Pellegrino with a pH of about 5.6. Perrier contains calcium, fluoride, chloride, magnesium, bicarbonate, nitrate, sodium, potassium, and sulfates, S. Pellegrino has the same minerals as Perrier and also has silica, strontium, and lithium.

Tonic water actually is not water. What it is, rather, is a sweetened soft drink that contains carbonated water, like most sweetened carbonated beverages. Tonic water is most popularly known to be a mixer for gin.

Let’s not get into the two carbonated water choices that are often confused with each other: Soda water and club soda. They do both have ‘soda’ in their names which causes much confusion. But they are not the same thing. Here’s why.

Are Soda Water And Club Soda the Same?

The Thing About Soda Water

Generally, soda water is the term that is used to refer to unflavored carbonated water that has no other add-ons. Soda water is just plain water with an infusion of carbon dioxide.

The Thing About Club Soda

While also carbonated like soda water, club soda on the other hand, has many additional minerals in it. Club soda has potassium bicarbonate, sodium citrate, potassium citrate, and potassium sulfate. The exact combination and recipe can also vary depending on who manufactured it.

So which one is the better option, soda water or club soda? Well, this depends on what you will be using it for.

As A Stand-Alone Drink

If you are choosing between soda water and club soda as simply sparkling water options, then the truth is you can pick either one. They are both carbonated water that can be very refreshingly delicious when served with ice and a dash of lime or lemon and are good options if you desire hydration with a little oomph.

However, just remember that the key difference lies in the salt content of these two types of carbonated water. So if you are very particular about your sparkling water’s salt content, then it is important to be mindful of choosing the right drink for you:

If the salt content is not really something you have a preference for, then soda water and club soda are very interchangeable, and you can choose to enjoy an ice-cold glass of either beverage.

When it comes to mixing drinks, depending on what it is you will be mixing, there is nothing wrong with switching club soda for soda water. There are some drink mixes wherein other types of carbonated water may be more appropriate – such as tonic water – so, at the end of the day (or night?), it all comes down to you and your interpretation of the drink mix you are making.

In bars, club soda is said to be the preferred choice when mixing. This is primarily because club soda was basically created primarily for mixing drinks, both alcoholic and non-alcoholic, in such establishments.

Aside from as a sparkling beverage and as a mixer, both soda water and club water come with many benefits. Let’s run through some of them so you can better decide which one is more to your preference.

Soda Water vs. Club Soda: Both Bubbly But Better

If that bubbly sensation is what you are looking for, then either of these two can be a great alternative because they both provide the same fluids and sensations — just in an overall healthier package!

Also, both club soda and soda water count toward your fluid intake. So these are good choices to enjoy that soda sensation whilst being healthier about it AND adding to your water intake for the day!

Soda water and club soda are both bubbly, refreshing carbonated water options that can be great alternatives to your typical soda. With the only difference in its salt content, what you choose will depend on how particular you are about the salt levels in what you are consuming. And of course, if we’re talking about mixers, then it all depends on the drink you are making! Cheers to the bubbly!