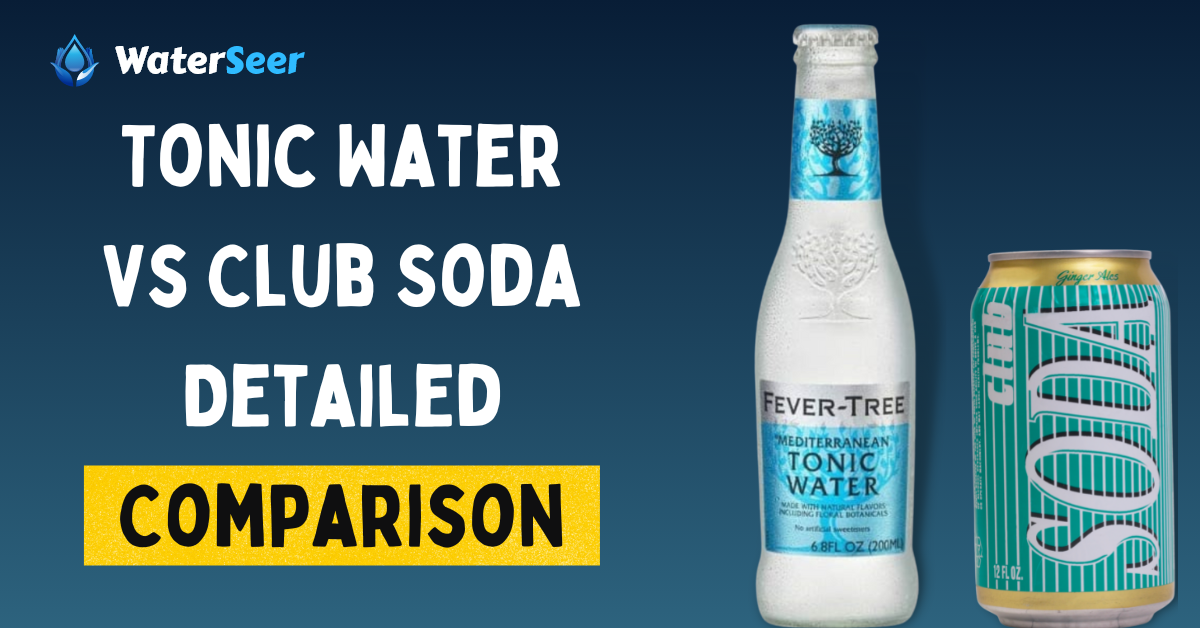 Nowadays, people are more committed than ever to living healthier lifestyles. Wellness is a premium, and understandably so. After all, health is wealth, so taking care of one’s health has become a top priority.

As we seek to embrace wellness and health, we have all become more mindful than ever about our choices — especially our dietary choices. We now carefully consider everything that we put into our bodies, and that includes what we drink.

Taking in enough water daily is essential to a healthier self, but it can also be a challenge at times! Some people don’t particularly enjoy chugging lots of water. Some find themselves seeking alternatives. Some may be struggling to replace their sodas with healthier H2O.

This is where carbonated water comes in!

Carbonated water has turned into a great alternative to sodas and other sweetened soft drinks. This is the very reason why it has been zooming up the popularity scale. It appeals to a wide range of people — which is also probably why more and more carbonated water options are now filling the market. But what sets each one apart?

In particular, tonic water and club soda are two carbonated water options that are commonly served in establishments and found in groceries and stores. So you may be wondering what each one is and how similar and different the two may be to each other.

Read on to know more about tonic water vs. club soda!

Getting To Know Carbonated Water

Part of leading more health-conscious day-to-day lives means making sure that we are able to meet our daily hydration goals. It is of the utmost importance to be able to drink enough water each and every day.

There are many different factors that go into determining the amount of water that each individual should drink in a day, such as location, activity level, gender, and more. The first challenge is finding out what your daily hydration goal should be. Once you know, the second and perhaps bigger challenge now comes in reaching that goal consistently.

The truth of the matter is that water does not appeal to everyone equally. Some people love it and can’t get enough of it. Some like it enough but may struggle with being able to drink enough. Some prefer sodas and sweetened beverages over them.

Carbonated water is an excellent way to be able to reach your daily hydration goals while adding a bit of variation to your beverages. The demand for carbonated water has risen steadily as more and more people have turned to it as a substitute for their usual fizzy drinks or as a way to drink more water without just drinking plain old water.

Carbonated water appeals to a wide range of consumers:

Now because it has gained a bigger audience and has taken over a bulk of the consumer market, more and more options have come out. The market is saturated with different types of carbonated water, such as club soda, seltzer, tonic water, sparkling water, and more.

It may seem confusing, but the simple fact is that these are all types of carbonated water. Where they differ is in their processing methods and the added compounds. These differences result in varying flavors and mouthfeels or drinking sensations, so it’s no wonder some prefer one type over others.

Two carbonated water types that are commonly found in establishments are tonic water and club soda. So let’s delve into the intricacies of these two drinks so you get a better understanding of the drink choices that you may be encountering, and if either one of them is up your alley.

However, what sets tonic water apart is that it contains quinine.

Quinine is a compound that is isolated from the barks of cinchona trees. It is what gives Tonic water a bitter taste.

Historically, tonic water was once considered a medicinal drink. It was offered by medical professionals to soldiers and citizens as it helped to treat malaria. Tonic water was used historically for malaria prevention in tropical areas where this disease was very prevalent.

It soon became popular because of its flavor, and now it is a widespread ingredient used for many kinds of mixed drinks, particularly those that include vodka or gin.

Club soda is water that is carbonated by infusing it with CO2 or carbon dioxide gas, after which it is mixed in with the minerals. It is basically carbonated water containing other additional minerals such as disodium phosphate, sodium bicarbonate, sodium chloride, and potassium sulfate. These minerals are what give club soda a mild, slightly salty taste, very similar to the taste of mineral water.

Club soda is very closely related to other kinds of bubbly water, most especially sparkling water, which is a type of carbonated water with natural spring carbonation. Experts say that it is also similar in taste to mineral-free carbonated water beverages such as soda water, sparkling water, or seltzer water. This is what mixologists often interchange them as substituting any of these with club soda will lead to a similar final taste and result.

Tonic water and club soda are both carbonated waters that you can choose to drink or even use to mix cocktails. Still, there are some notable differences between the two:

Tonic water and club soda both feature dissolved carbon dioxide, which creates that characteristic fizz they both have. However, manufacturers then add other ingredients on top of that to create each one’s signature taste.

Tonic manufacturers infuse quinine, a compound taken from the bark of cinchona trees that is bitter in taste. They also add sugar to be able to counter the bitterness.

Club soda manufacturers put minerals to the beverage that together are able to mimic the natural minerals of mineral water as well as its slightly salty flavor.

The biggest thing that sets tonic water and club soda apart from each other is taste. Tonic water is known for its bitter and sweet combination of flavors. Club soda, on the there hand, has a mild, faint saltiness to it.

The nutritional content of tonic water and club soda also have some distinct differences.

Tonic water contains added sweeteners such as high-fructose corn syrup or sugar. These sweeteners bring added calories too into the mix. Because of this nutrient profile, tonic water is legally classified under the soft drink category. Diet tonic waters are available, which feature diet sweeteners like aspartame that have no calories.

Plain club soda is more like water in the sense that it has the same nutrient profile as plain water. Club soda usually has zero calories as well as zero sugar.

Tonic water and club soda are both used as beverage substitutes for water. They are both good ways to fulfill your daily hydration goals.

Both these drinks are also good alternatives to those who love sweetened beverages and sodas because they bring the same fizzy taste and drink sensation and help you stay hydrated at the same time.

They both also have some medicinal value. Tonic water was used to combat malaria back in the day — it had a higher quinine content back then. Club soda, according to some people, aids in stomach ache and indigestion.

Additionally, tonic water and club soda are ingredients that are both used by mixologists when making cocktails, as they give these drinks a bubbly mouthfeel. Bartenders very rarely substitute tonic water for club soda and vice versa because they bring different tastes to the table.

To recap our comparison here is a handy chart detailing the differences and similarities between tonic water and club soda at a glance.

Let’s see which one of these carbonated waters stands out in three big categories.

From club soda’s components, this is carbonated water that has a mild, salty taste because of the mineral salts that are dissolved in it. Its carbonation likewise makes club soda slightly acidic. Apart from these two characteristics, club soda does not really offer more in terms of taste unless it is flavored with fruits such as citrus.

Tonic water, on the other hand, is quite possibly the most flavorful carbonated water on its own. It is most well-known for its bitterness from the alkaloid quinine and the sweetness from additive sweeteners that balance out the bitterness.

Both tonic water and club soda are available in options that are flavored. Club soda is available mainly in citrus flavor. Tonic water has more variety in the flavor department, such as Mediterranean, elderflower, and cucumber.

For many who drink both and rank them on taste alone, more people seem to enjoy tonic water more because it is very similar to soda. It has more depth of flavor as compared to club soda.

Due to the artificially added mineral salts found in club soda, it expectedly contains sodium. There can likewise be traces of zinc, calcium, copper, and magnesium, depending on the various manufacturer. Aside from this, club soda does not have any sugar, protein, carbohydrates, fat, or calcium.

Tonic water has more nutritional content. It contains added sugars, plus carbohydrates and calories. Tonic water has sodium, but it does not have fiber, protein, or fat. But the fact that it contains more does not necessarily mean it is superior.

A big consideration is how each of the nutritional values affects one’s health. Tonic water has sugar, carbs, and calories, which is why some people choose to steer away from it. But anyone can easily drink club soda without worrying about any of that.

These two drinks likewise have additions in them. Club soda contains minerals, while tonic water contains quinine and sugar. These additives help tone down carbonation a bit, so they are not too aggressive. Consuming either one will give you that crisp, clean mouthfeel.

Tonic water and club soda are both very popular types of carbonated water. They are good substitutes for water and will keep you hydrated. Your preference will be determined by other factors, such as taste, nutritional content, etc.

Tonic water typically has sugar content which may be one major reason club soda is what many people prefer. If you are conscious of sugar and calories, then club soda is the better choice for you.