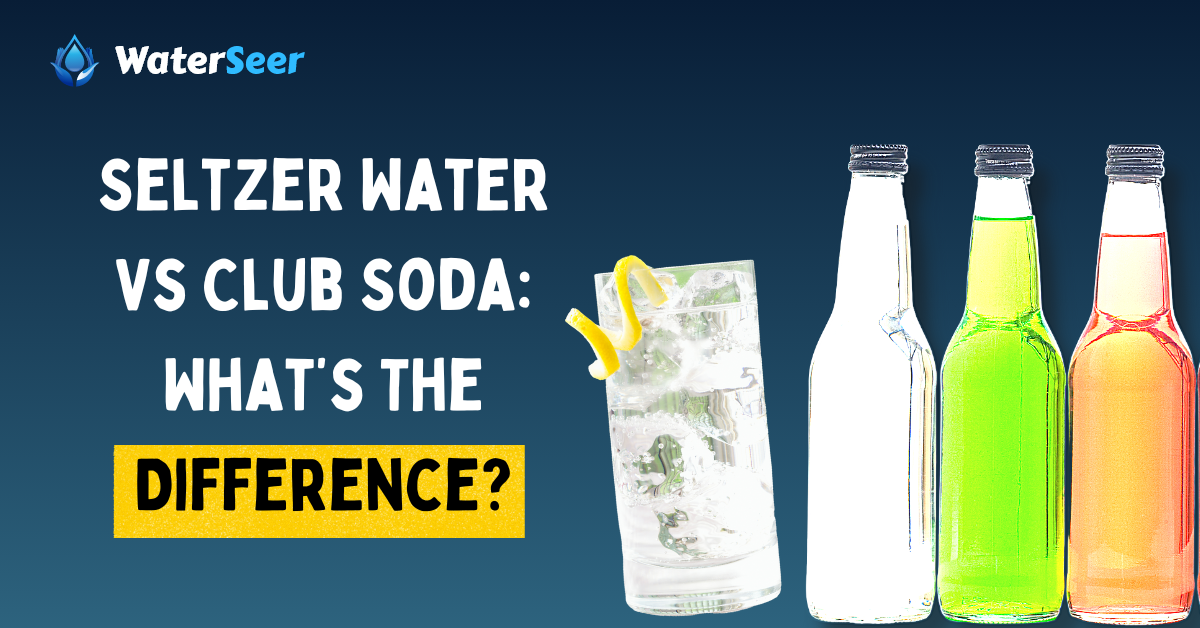 When you are walking down the aisle at the grocery store or perusing the menu at local restaurants, you’ll probably find yourself encountering many different types of carbonated beverages. These include sparkling water, tonic, seltzer water, and club soda.

Many assume that these are all the same products with different names. But know this: These products are, in fact, not the same, no sir!

In particular, seltzer water and club soda are often thought to be identical bubble drinks, and people assume – wrongfully – that they are interchangeable. Don’t believe us? Read on!

If you are wondering about seltzer water vs club soda and what’s the difference between the two, you’ve come to the right place.

What is Seltzer Water?

Seltzer is also known as seltzer water and is even referred to as soda water. It is basically water that was infused with carbon dioxide gas. This infusion of carbon dioxide makes seltzer carbonated.

Plain seltzer is concocted with the use of plain filtered water. It has no added minerals, no sugar, no carbohydrates, as well as zero calories. This is why when it comes to taste, seltzer is pretty much similar to regular water in that regard.

The name “seltzer” originated from a German town named Selters. Selters was well known for its naturally effervescent mineral springs. Another common confusion about seltzer is that plain seltzer is often interchanged with sparkling mineral water. But sparkling mineral water is made up of natural spring water, and it contains minerals such as calcium, sodium, and magnesium.

What is Club Soda?

The best way to differentiate club soda from other bubbly waters is that this one is a type of unflavored carbonated water that has then been infused with minerals. Some of the minerals are potassium sulfate, potassium bicarbonate, sodium citrate, sodium chloride, disodium phosphate, sodium bicarbonate, and more. These minerals were infused to enhance the water’s flavor, which is why club soda has a saltier taste compared to seltzer.

Club soda can be used when mixing drinks, removing stains, or as a stand-alone beverage. It is often found as a common ingredient in several cocktails like tequila soda, gin fizz, and Tom Collins. Club soda contains some trace amounts of sodium, but it has no additional carbs or sweeteners. Because of this, though club soda’s additives do affect the taste, it still has zero calories.

Many carbonated water lovers assume that seltzer water and club soda are totally interchangeable, but as we touched on earlier, this is very much not the case with these two. There are a few key subtle differences that set these two kinds of bubbly water apart.

When it comes to seltzer water vs club soba, the main difference is in what’s been infused or added into the water.

Also Read:- Club Soda vs Sparkling Water: Everything You Need To Know

Which Has A Better Taste Between Seltzer Water And Club Soda?

Some kinds of food are made differently from each other but interestingly end up tasting so similar, like jelly and jam, for example. Interestingly enough, it is the opposite for seltzer water and club soda.

While they are quite similar in make, their unique tastes make them quite distinct from one another. Seltzer water tastes very much like still water; club soda gives off a flavor that is slightly salty due to the minerals that have been added to it.

That slight saltiness plus the fact that club soda brings about more of a punch compared to seltzer water are why club soda typically is the chosen bubbly for many cocktail mixes. This can be explained further in terms of cooking.

When cooking dishes, salt is added to recipes to bring out various other flavors, not necessarily so that the dish you are making becomes salty. In the same vein, club soda got the same effect when mixed with the other ingredients used in mixing cocktails.

It all comes down to a matter of preference. What has a preferable taste for one may not be as favorable to another. Both bring with them some appealing characteristics – it just depends on what the person prefers as well as what he or she will be using it for.

Which is The Healthier Choice: Seltzer Water or Club Soda

As mentioned earlier, both seltzer water and club soda contain zero calories, carbohydrates, and fat, which makes them healthier than a lot of other carbonated drinks. However, when comparing the nutritional value of each one side by side, one key factor stands out: Sodium.

In the current Dietary Guidelines for Americans, the recommendation is to make sure your sodium intake stays under the 2,3000-milligram mark daily. That is roughly about 1 teaspoon of salt. Based on that recommendation, a 12-ounce serving of club soda has just around 4% of that number.

What this means is that enjoying a glass of club soda will not affect your sodium intake all that significantly. You’ll bring about more damage when you scarf down that pizza for dinner or enjoy that hotdog sandwich as an afternoon snack.

Having said all of that, if you are consciously making an effort to lessen your sodium intake, drinking a lot of club soda may not be the way to go. The better choice would be to switch to another kind of carbonated water instead.

Which One is Right For You: Seltzer Water or Club Soda

Seltzer water is the simplest and most basic form out of all the carbonated waters. It is just regular water infused with carbon dioxide, which gives it that fizz. Club soda is water infused with carbon dioxide and added minerals such as potassium sulfate and potassium bicarbonate. These added minerals give club soda that slightly salty kick, enhancing the flavor.

Seltzer is every bit as hydrating as plain water, making it a great alternative to sodas because it gives that addictive fizz while staying as healthy and hydrating as regular water. If you are looking for something more flavorful, there are seltzer waters that are infused with natural flavors.

Club soda is a great option to mix into drinks. But suppose you prefer to hydrate in a slightly saltier manner and don’t mind an almost inconsequential amount of sodium. In that case, club soda can also be a good pick for everyday hydration.

At The End of The Day, It Truly is Up to You!

Seltzer water and club soda are two types of bubbly water that are quite similar and with just a few tiny differences. But these differences really do make all the difference. And knowing these subtle differences will help you know which one is the optimal bubbly of choice that will best suit your tastes and your liking.